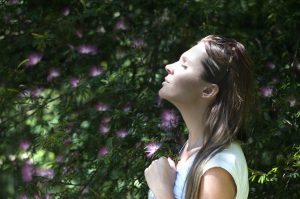 Every time we breathe, we inhale about 20,000 microscopic dust particles; some stay in the hairs of the nose, others adhere to the walls of the throat and many more in the lungs.

Health experts care more about small grains than large ones. This is because the human body has learned to avoid the passage of the larger fragments, but the tiny ones can bypass the traps of the organism and navigate towards the lungs.

The lungs are used to receiving a certain amount of dust and are able to effectively capture and eliminate intruders. But even moderately dirty air contains thousands of tiny particles per cubic centimeter, hence about thirty million particles can stick to the walls of the respiratory system during one minute of breathing. The mucus that covers these walls is full of tiny agents that blow the dust out.

At the same time, another ten million particles can enter through the alveoli. Some will dissolve and disperse, some will not. Fortunately, inside each alveolus there are cells that every time a grain of dust enters, they are in charge of absorbing it and then expelling it by means of the aforementioned agents. Most of the time the work is effective, although sometimes it has its flaws.

Until a few years ago, scientists drew the line between a dangerous dust particle and another that was not based on its size : 10 microns (one tenth the width of a hair). But researchers have had to move the part, and it is now estimated that those 25 times less than a hair wide can cause death or illness. By these standards, most of the particulates that fall within this classification would be industrial dusts and pesticides.